They Named Him Zerubbabel 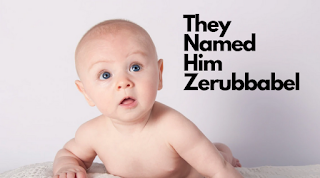 They Named Him Zerubbabel

Zerubbabel
It means “Stranger in Babylon”.
His parents knew he would grow up outside of God’s Promised Land. They knew he would be raised among heathens, influenced by paganism, and surrounded by idolatry. They knew he could not be protected from sinful influences. They knew the culture would constantly pull him away from serving the true God of Israel.
His childhood would be much harder than theirs. His religion would be mocked and persecuted. His faith would be tested every day of his life.
Like all parents, they had a choice. Torn between teaching him truth, which would lead to hardship and difficulty, or embracing compromise, which would protect him from the harsh persecution of the surrounding culture.
Compromise would make it easier for him.
Compromise would allow the things that the other children enjoyed.
Compromise would mean a more “normal” life.
For nine months,while he was in the womb, they wrestled with this decision.
When the day came and he was born, his parents lifted up their eyes to Heaven and said, “We call him Zerubbabel – Stranger in Babylon.” They prayed God would protect him but in the end, they named him Zerubbabel.
For the rest of his life, when anyone asked his name, he would say, “Stranger in Babylon.”
Every time he signed a document, he would be reminded who he was and who he wasn’t.
A stranger he will always be.
He will not be accepted in this culture.
He will not be comfortable in this culture.
We would rather he walk the hard road of holiness than the easy road of acceptance and assimilation.
They Named Him Zerubbabel.
Parents, don’t compromise your faith to protect your children. St. Paul said we’d be strangers and pilgrims, that we’d be in this world but not of this world. Instead of seeking acceptance and citizenship, embrace Christian “strangership”.
This world is not your home.
Don’t let it become your children’s home.
Name them Zerubbabel.