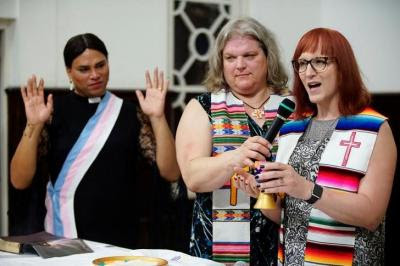 They were too divided to serve under the name “United” any longer.

That was the official word, but what is the real reason? It must be over the deity of Christ. Nope. The Trinity doctrine? Nay. The mode of baptism? Nyet. The reality of heaven and hell? Wrong again. The new denomination, to be called the Global Methodist Church (GMC), filed for formal separation over the UMC’s “growing acceptance of modern teachings on sexuality and gender.”

We saw it happening. It became obvious decades ago with the assertion of spiritual and denominational female leadership. The agenda: capture leadership for liberal feminists in certain prominent churches and denominational positions. Use language borrowed from the old N.O.W. and other feminist organizations. Twist word meanings and Scriptures to make it all sound authoritative and “compassionate.” Quote modern feminist authors. Cast traditional religious and societal understandings of authority as misguided and narrow. Set up straw targets like “patriarchalism.” Make biblical mandates and practice sound outdated. And finally, where were they? Embracing the LGBTQ agenda and evoking a denominational split.

There are lots of words and phrases like “equity” and “transformational leadership in the church” being tossed about with accommodating definitions. The current cultural climate is making women feel left out if they are not doing everything men have traditionally done, filling the same roles, serving in identical positions. It is homes that are being left out, husbands that are being socially emasculated, and children being ignored and left for others to raise. Can anyone truthfully say that following the cultural trends has moved Christianity in America closer to God’s plan for church and home and family?

Religious organizations must recognize the subtlety of our enemy. He won’t begin deception with the overturning of major doctrinal issues, but will feed them bite-size bits of feminist fantasies as though they were long misunderstood biblical mandates. We already see where it has taken science, education, girls sports, advertising, woke corporations, and politics in particular. Three lesbian women changed American politics last summer, vowing to make our citizens Marxists like them, and destroying the nuclear family in the process. They are now writing the curriculum for your child’s school, and churches are not out of their plans. Where are the conservatives that will stand up help lead America and our churches back to the Bible and God’s agenda for the home and church before other major denominations see themselves heading toward splitsville?

“Remember Lot’s wife,” Jesus warned. Perhaps she even encouraged Lot in his choices, but don’t forget—it was Lot who took her there. He should have known they were on the road to the lowest place on earth—Sodom. If you don’t want to go to Sodom, don’t pitch your tent in that direction.